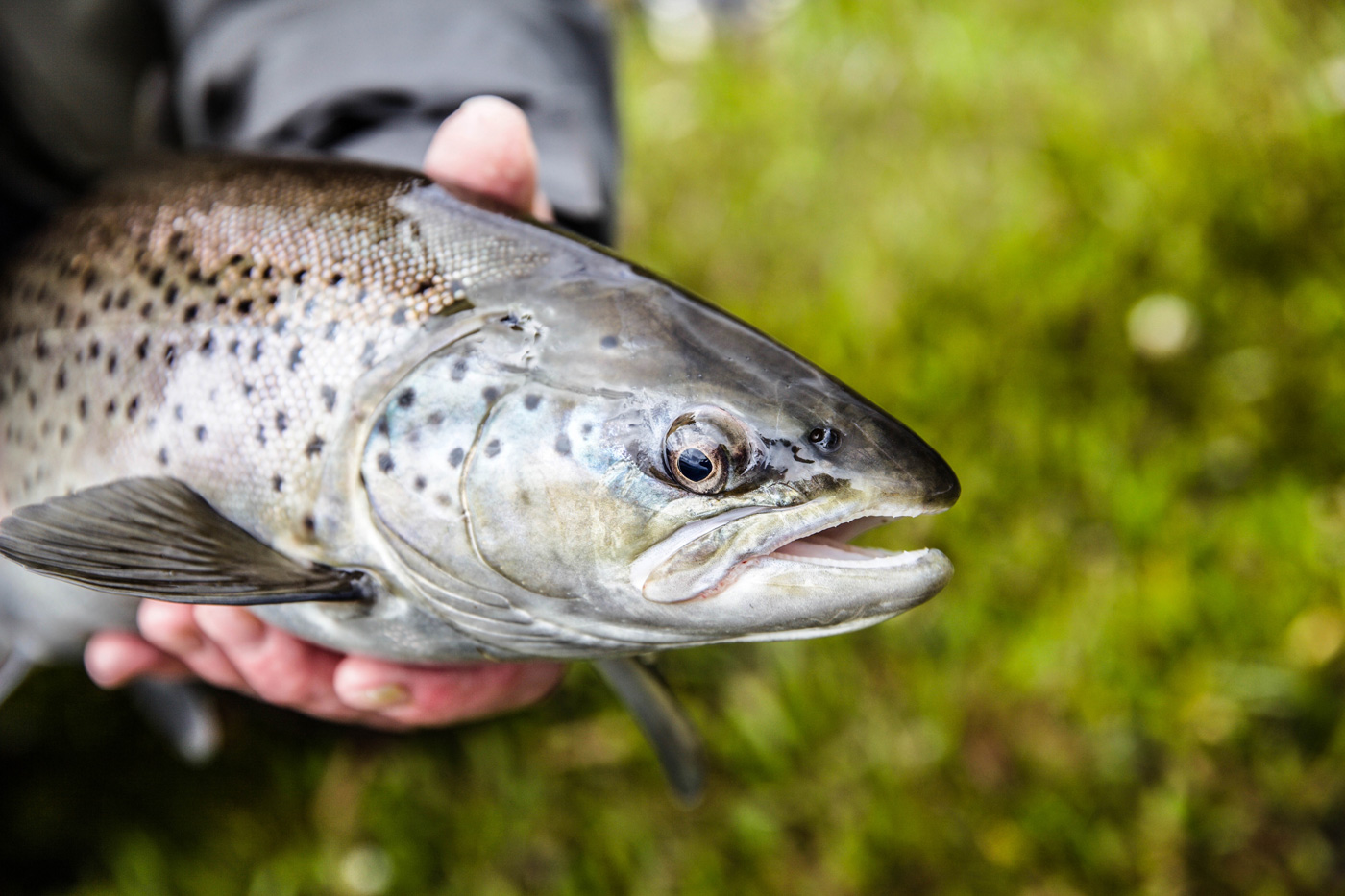 When the first Europeans came to the Falkland Islands and looked into the archipelago's waters, they were - to say the least - somewhat disappointed with its edible content.
There were only small fish that were barely larger than 20 cm.

They might have described them as "little silver fish“ and those with patterns on their skin that „somehow resembled zebra stripes“.

Well, the first settlers did not necessarily have the educational background of a Charles Darwin and simply gave the fish they saw the names that were reminiscent of fish from home.

Thus the zebra “trout” is far from being a trout, and this other larger fish with its solid scales that moves between the open sea and the tidal area is also not a mullet at all.

The country was huge, with small creeks, rivers and ponds everywhere, so it comes as no surprise that sooner or later people thought about fish stocking. Experimenting with possible salmonid species started in the 1940s.

A first, let’s call it a "lukewarm“ attempt with a combination of brown trout, rainbow trout and char from neighboring Chile proved unsuccessful.
But a second attempt in 1947 with 30,000 brown trout ova is considered as the first successful stocking on the Falkland Islands. Firstly these were spread over East Falkland.
In the late 1940s and early 1950s, further "deliveries" from the mother country England were added, which could also be set out into the waters of West Falkland.

As of the mid-1950s, the first successes in sport fishing were recorded and the first big fish (up to 5.5 kg!) were caught in the Malo and Murrell.

The behaviour of the Atlantic salmon (Salmo salar) is remarkable, deeply impressive even, however for us anglers a regrettable circumstance.
Despite all efforts - also on the other continents of the South Atlantic such as South America, Australia and New Zealand - the fish has never become indigenous.
After it was stocked, it moved into the sea as a migratory fish and was never seen again.
It is believed that the "return radar“ of the salmon, which is based on the magnetic earth field and / or a compass following the position of the sun, could not be used at these latitudes and the fish simply could not find his way back home.

Other attempts and considerations to establish a natural population of Pacific salmon species such as the "Pink Salmon" were luckily abandoned.

You fish for these fish on the Falkland Islands

The European brown trout has proven itself to be the ideal fish to stock in the cooler regions - since it presents itself as a fighter that can switch between fresh and salt water in a brilliant way.

On the Falkland Islands, due to the well documented stocking measures, we can safely claim that a sea trout is in fact the same species as a freshwater trout. Namely a brown trout migrating into the sea.
With its evolutionary advantage it has spread around the Falkland Islands along the coastal regions and through the inlets.

Confusion or misinterpreted specifications of the caught fish always arise. This is due to the different colours and sometimes proportions of the fish. But all descend from the originally stocked Salmo Trutta.

Brown trouts that do not migrate into the sea are slimmer because their food mostly consists only of insects. Their colour is matching the surrounding water, from light to deep dark brown.

If the trout is smart, it migrates towards the richly laid table of the Falkland Islands coasts to feast itself to a full extent. With krill, small "smelt" and crustaceans in abundance, it can then grow into serious giants of more than 10 kg.

According to the environment, their colour in the salt water is silver to dark gray and in very peaty coastlines it appears in all sorts of brown shades.

Fish up to 4 pound still have the red dots so typical of Salmo Trutta. If they weigh more than four pound, they usually lose them.

Multiple daily changes between fresh and salt water is not uncommon for sea trout.
And very often you see the silver "Greenlanders" that are not yet in the „spawning business“ roaming around in swarms in front of the bays.

Following the call of reproduction, however, the larger trout set off in autumn (from March onwards) to look in the direction of their spawning areas and to be ready for the perfect time. Now you come across the biggest fish, slowly adapting their colour to the spawning waters.

Eleginops maclovinus
I have to admit that although I am a pure salmonid angler I was quite impressed by the Falkland "Mullet".
Once I was standing on a bridge at the FRYING PAN when I observed a fully grown specimen circling in majestic rounds. What a magnificent sight!
I can understand that hunting for it has become a popular maritime sport on the islands.

On fine days, countless islanders, mothers with their children, pilgrim to the shores to "hunt" this fish.
This „hunt“ is very unpretentious (probably due to the nature of the fish), even with raw red meat as bait. Oddly enough, this fish likes everything that has a reddish color. It doesn't even need a taste. It is said that you might be able to catch it with a piece of red fabric.

As mentioned before, the Falkland "Mullet" is no mullet, but an Antarctic fish.
It is one of the Eleginopidae family, which has ventured to the southernmost land masses north of Antarctica.

Eleginops maclovinus, our Falkland "Mullet", has a very long and characteristic dorsal fin and a corresponding pectoral fin.
It has quite a prehistoric appearance, a very leathery skin with rough scales.
It can grow to over a metre and reach the age of 10 years.
Following the tides it swims into the bays and to the freshwater inlets and loves as a bottom feeder to eat crustaceans - hence its weakness for everything that is red.

Interesting fact for the educated angler:
The Falkland "Mullet" is a hermaphrodite. It changes sex with growing age (estimated as the 5th year).
Born as a male, it later becomes a female and carries within him / her a remarkably large number of small roe, which he / she needs for reproduction.

Other species of fish on the Falkland Islands

In addition to the Brown or Sea trout and the "Mullet", anglers on the Falkland Islands sometimes will encounter the Zebra "Trout" and the Falkland Minnow in fresh waters and the Falkland "Smelt" in the bays.
PLEASE NOTE THAT THESE ARE NO TARGET FISH FOR THE FISHERMAN. THEY ARE ONLY MENTIONED ON THIS PAGE FOR BEING AN ESSENTIAL PART OF THE WATER FAUNA ON THE FALKLAND ISLANDS.

Aplochiton zebra
Like the Falkland Minnow, the Zebra “Trout” is the only freshwater fish on the Falkland Islands that is indigenous to the country.

During his expeditions in 1833/1834, Charles Darwin was so deeply impressed by this rare fish with its unusual pattern that he preserved a specimen, which is still on public display in the Natural Museum of History in London.

In Darwin's time, this fish was found all over the Falkland Islands in the creeks, rivers and ponds and was widespread.

Today Aplochitonidae can only be found in the southern areas of Australia, Patagonia and the Falkland Islands.
And like the Falkland Minnow, this fish spends short parts of its young life cycle in salt water.

This beautiful little fish has been completely suppressed by brown and sea trout and can therefore only survive in waters where there are no salmonids, meaning these strictly protected animals can only be found in the most remote corners of the Falkland Islands.

Fish of the Galaxiidae family are quite common in the southern and cool hemisphere. Due to its current distribution area its origins are said to be traceable back to the supercontinent of Gondwana.
The influence of the moon, change and height of the tides are important factors in the reproduction of these fish.
In other countries such as New Zealand, Tasmania or Chile, galaxiids are caught in huge quantities when they migrate between the spawning areas and the estuaries and end up as delicacies on the plates of the gourmets.

On the Falkland Islands, the Falkland Minnow is only about 12 cm long and widespread. Some people add a third species to it, because if it feeds on a lot of crustaceans it gets red stripes on the skin.
However, Falkland Minnows are nowhere near as numerous as on other continents and do not play a major role as edible fish - unless you are a Salmo Trutta.

Odontesthes smittii and Odontesthes nigricans
For the sake of completeness, a mention of the "Smelt" must not be missing on this page; because this fish is actually not one of the freshwater fishes of the Falkland Islands.
It only moves to the lower regions of the estuary.

However, as an angler you will often come across this important forage fish and it is good to know it.
In addition to the "mullet", it is the most widespread fish in the coastal regions of the Falkland Islands and swims along the coasts and bays in large silvery swarms.

There are two types of this Atherinidae family on the Falkland Islands:
Odontesthes smittii and Odontesthes nigricans.

Apart from the coastal areas of the Falkland Islands, these fish only occur in the southernmost coastal regions of Argentina and Chile.