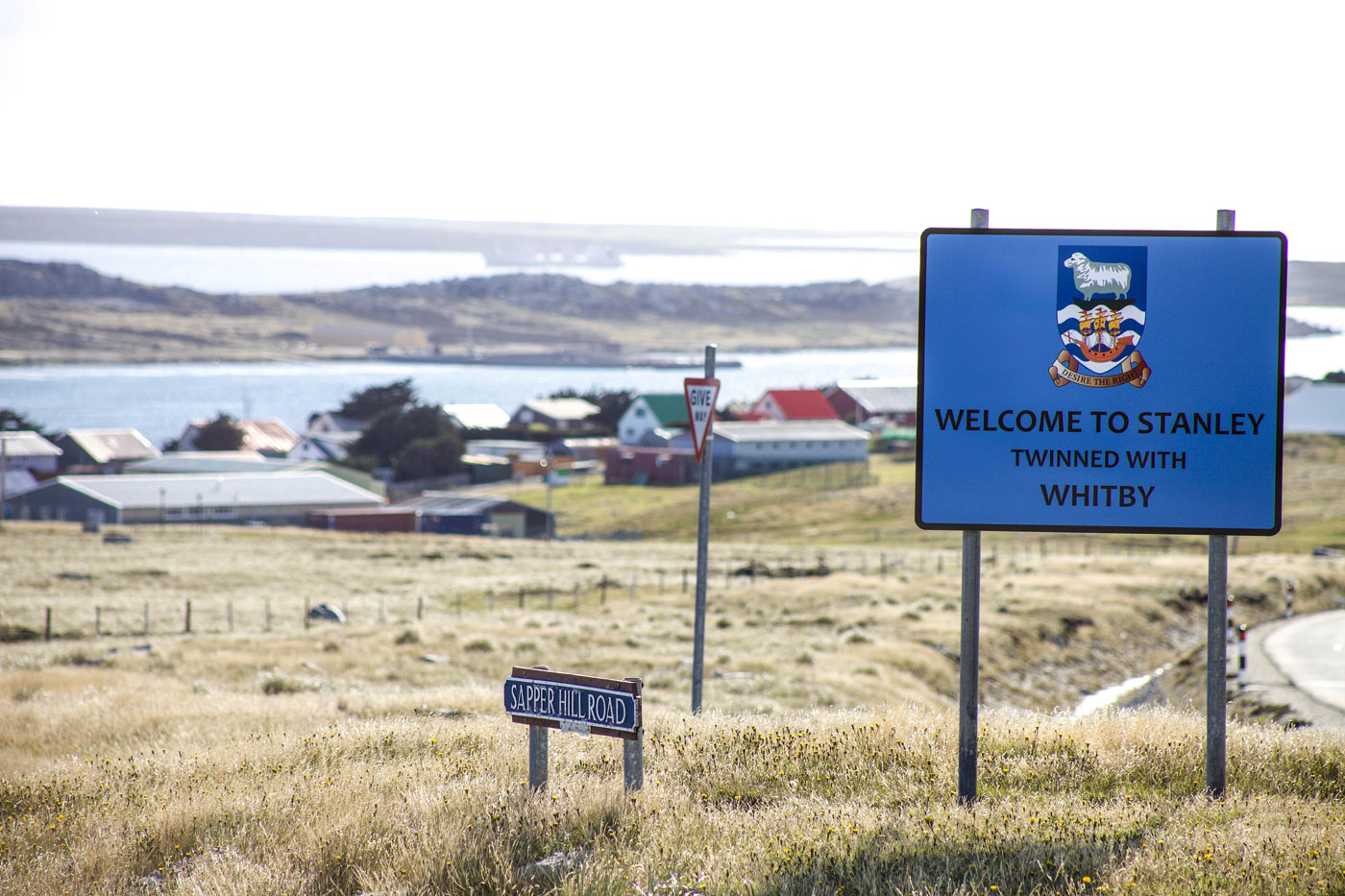 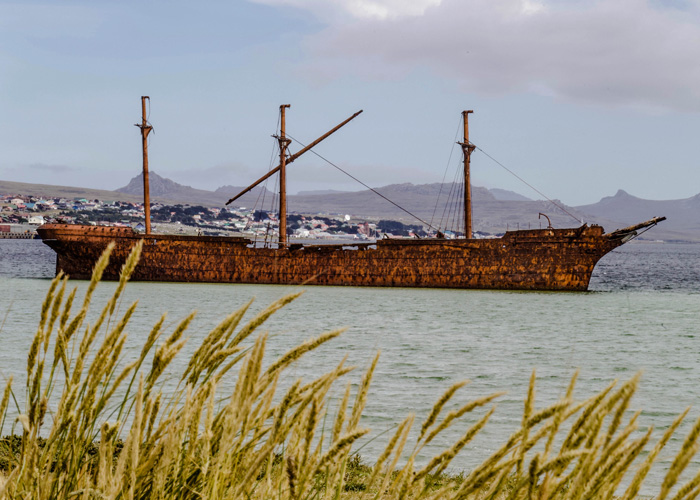 The entire Falkland Islands are home to merely 3,000 people and two thirds of them live in Stanley.
Although according to modern standards Stanley would not even be called a city it is the place to be, the capital, seat of the government and the beating heart of the entire archipelago.

Every inhabitant of the Falkland Islands comes to Stanley for their errands.
Refuel, pick up postal orders, doing bank business, have a chat or serenade with friends in a favorite pub with a pint of beer in the hand to toast life on the islands.
The picture of Stanley is mainly shaped by the many shipwrecks that lie scattered in the harbour. Many of them capsized around the Falkland Islands and were mapped later: Sailing ships from the 18th and 19th centuries, steamships and warships from World War II.

Due to its geographical location, the Falkland Islands have been an important stopover for all shipping traffic to the American west coast or the South Atlantic in past centuries – before they would venture out into the dangerous area around Cape Horn with its extremely difficult west wind drift. More than 800 ships capsized and 10,000 passengers stranded during the course of the centuries and the time almost every ship – be it an emigrant or gold-digger – had to pass the Falkland Islands.

Neither crew nor passengers were particularly enthusiastic about this circumstance and tried to avoid the stopover at any rate, seeing that they did not find themselves in the most elaborate of societies: Before the arrival of the first settlers and sheep farmers from the north of England and Scotland in the late 19th century the inhabitants of the Isles were a bunch of wild vagabonds or stranded whalers and sealers, whose life did not run on bread but on water. However, many a ship had no choice, but to dock for repairs or restock with fresh provisions before passing Cape Horn, which meant the crews grudgingly had to accept the ironically excessive prices.

All this changed from 1869, when the construction of the transcontinental railway line of the USA was completed and 1914 with the opening of the Panama Canal.

Until 1844, Port Louis was the administrative settlement of the Falkland Islands. After that Jackson's Harbor (now Port Stanley or just Stanley) was preferred - because of its better port, turf and fresh water resources.
Many of Stanley's houses still tell stories of its eventful maritime past: They were built from the wood of former sailing ships, erected mostly on posts, because landslides (turf slopes) are an ever-present danger on the peaty ground.

Today, we would call colourful Stanley a "very relaxed and decelerated place“.

The main traffic artery is Ross Road, which runs along the entire harbour.
Many smaller roads branch off uphill from Ross Road. Scattered between historic single-storey houses are administrative buildings with monuments, a hospital, schools, charming souvenir shops, small pubs and a few hotels.

In the harbor you often spot unusual looking Asian fishing vessels (so-called jiggers) waiting for new fishing licenses for catching tons of squid from the waters of the Falkland Islands for the Asian and European markets.


Busy activity occurs when the day visitors arrive, the so called "Day Trippers".
Everywhere in the streets and at the harbour they stroll, marvel, take photos of the colourful city. The picture of them, on the other hand, is quite uniform: outdoor clothing and complimentary corporate identity jackets from the respective shipping company. Next to them: a convoy of off-road vehicles ready to take them on a tour to a penguin colony. Yet there is no trace of a bus, and whoever had the pleasure of driving cross-country on the Falkland Islands knows why.

When it is a little difficult to find pubs open or to get a warm snack during the usual business hours, that means: the cruise ships have weighed anchor.
"Steady“ tourists in the city are still the exception and visits to restaurants and bars by locals are mainly concentrated on weekend evenings.

The Malvina and the Waterfront Hotel are arguably the most popular hotels in Stanley.
Centrally located on Ross Road, they offer hotel guests everything they would expect from a hotel stay.

As a fisherman and if you spend your fishing vacation with friends, a holiday home is usually the wiser choice.
When you come back with your caught fish under the arm, in waders and wading boots, you will certainly feel more comfortable in a holiday home and can then prepare the catch of the day yourself for dinner.

We stayed in Stanley in "Tu Guesthouse" and were very impressed by the friendly and helpful hosts and the comfort of the house.

You can compare all accommodation available on the Falkland Island Tourist Board website.

Although almost all groceries can only be delivered by cargo ship – affectionately named "Banana Boat“ – from the mother country England twice a month the supermarket shelves are well filled and nothing is missing. Even anglers are well supplied.

The prices are comparable to the European continent (including alcohol), only fresh fruit and vegetables are slightly more expensive.
The quality of fresh meat (beef and sheep) is excellent because there is no factory farming for cattle. All animals graze freely and thus are raised according to the best organic standards.

In short: The Falkland Islands are the perfect place for a meat and alcohol "diet“!
Vegans and abstainers however should plan a slightly higher holiday budget and alternative forms of entertainment…

There are very informative brochures published by the Falkland Island Tourist Board about hiking routes and sightseeing in Stanley and its surroundings.

As small as the microcosm of the city may be, its content and historical places are diverse.

Certainly a favourite: the Falkland Islands Museum.
Many artifacts have been collected here reflecting the history of the islands as well as their proximity to Antarctica.
The collection is a panopticon for everyone interested in maritime and nautical history.
An original hut from the Antarctic, which served as accommodation for expeditions, is particularly impressive.

Under no circumstances should you miss a trip to the Cape Pembroke Lighthouse.
On the way there you pass beautiful sandy beaches, many of which are still – sadly – closed due to landmines.
On the way back to Stanley, a visit to the Magellanic Penguin colony and the sight of the famous shipwreck of Lady Elizabeth is well worth a stop. 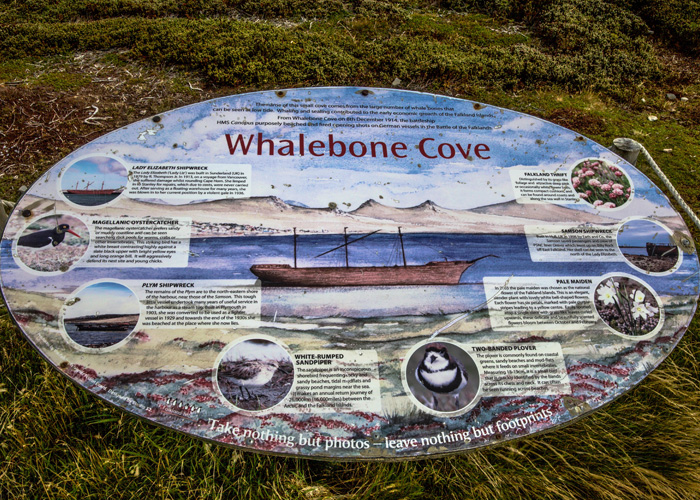 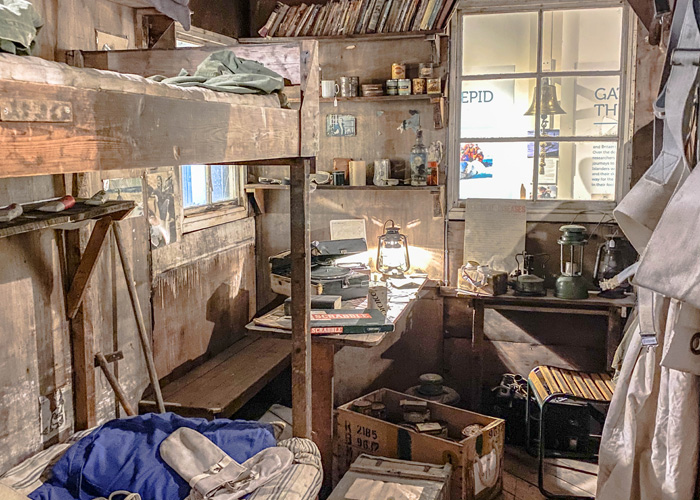 Brochures of Stanley of the Falkland Islands Tourist Board